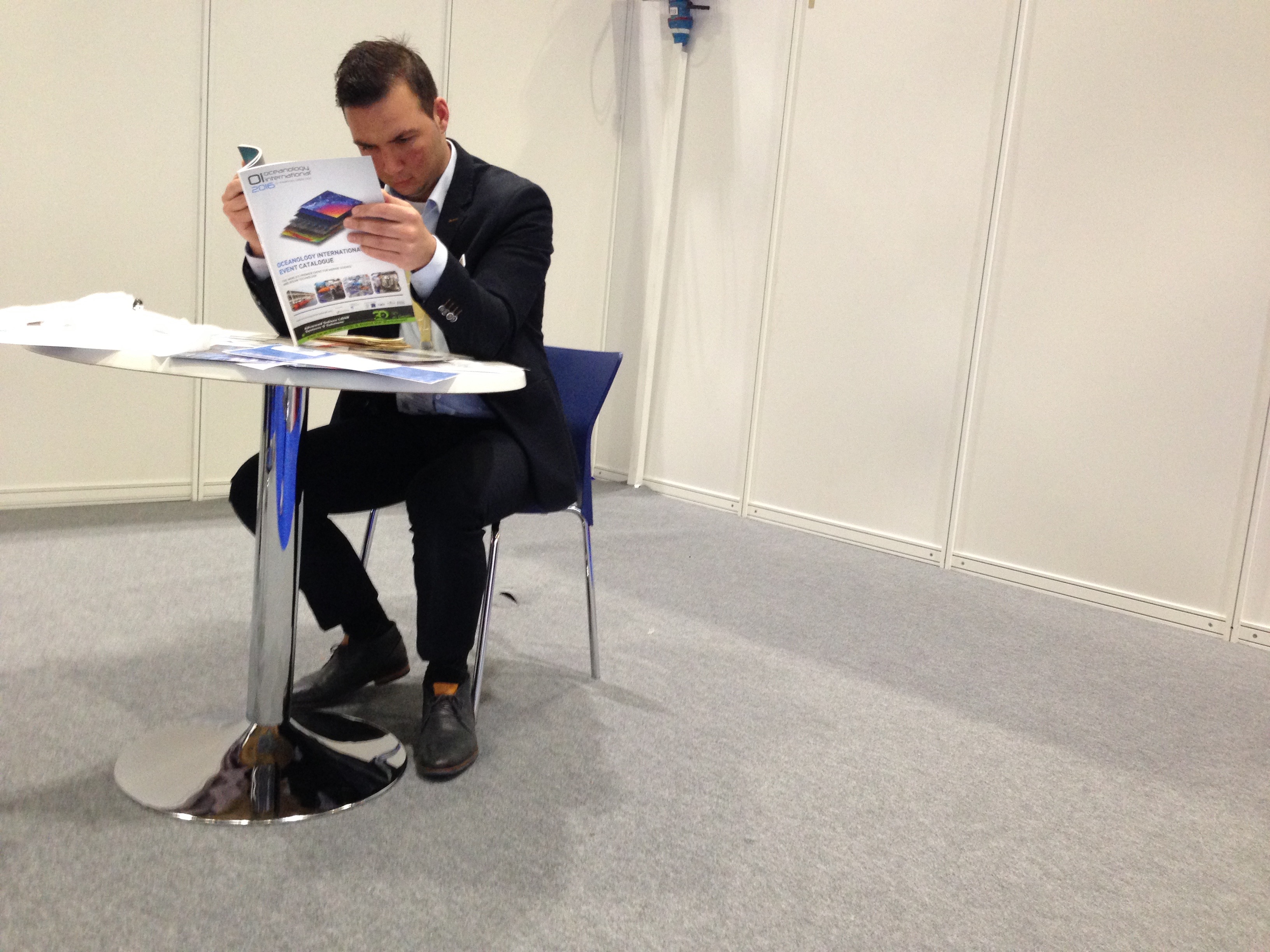 Hold onto your dicks/vaginas because I have breaking news:

Last week I went to an oceanographic conference.

I know. You’re thinking, “SHIT! I knew Fogg was a capital-P-Playa but I never expected him to be living life with that kind of intensity!”

Well I am. Deal with it. 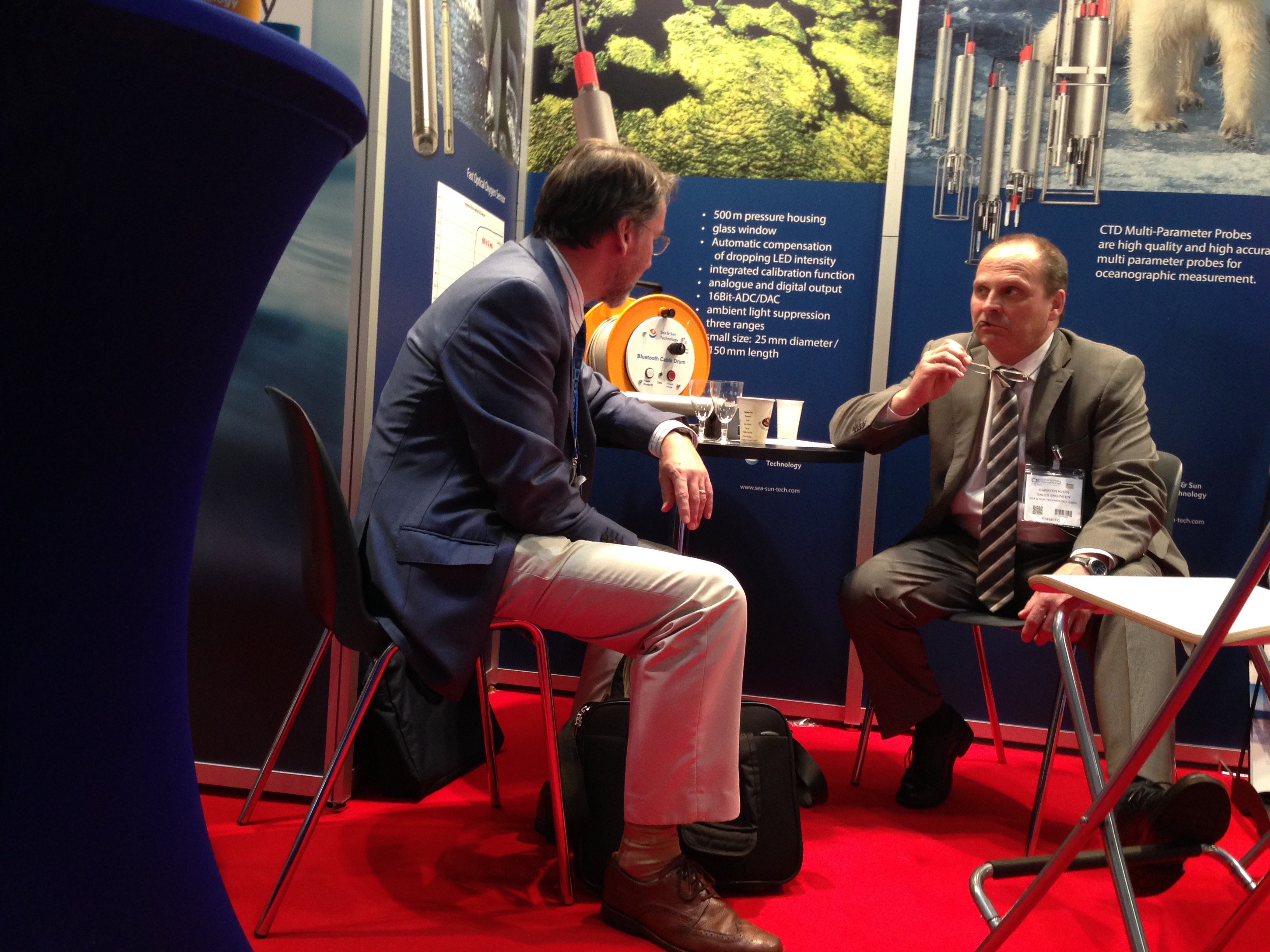 My girlfriend had to go to an ‘underwater fair’ and she asked if I’d like to come. Initially I was pretty keen but once I found out ‘fair’ meant three to four hundred men in ill-fitting suits bleating to one another about sonar technology I was 100% on board. It’s only four months till Edinburgh so I’ll do absolutely anything that isn’t writing my show.

On Tuesday, in order to avoid writing, I did what I call ‘gentle exercise’. Which is walking followed by absolutely nothing else. That’s right, I just wandered about for three hours rather than write. So….a massive room full of cool sea gadgets and free cheese? That’s a procrastinator’s paradise!

Now granted there were a considerable number of rumours going round that I wouldn’t fit in, but I don’t let little things like never having been on a boat, not having had a real job in 17 years, or a being absolutely terrified of dolphins stop me from enjoying a Maritime Trade Fair. Beneath my bookish yet sexually alluring exterior, I am 65% pirate (47% scientist).* 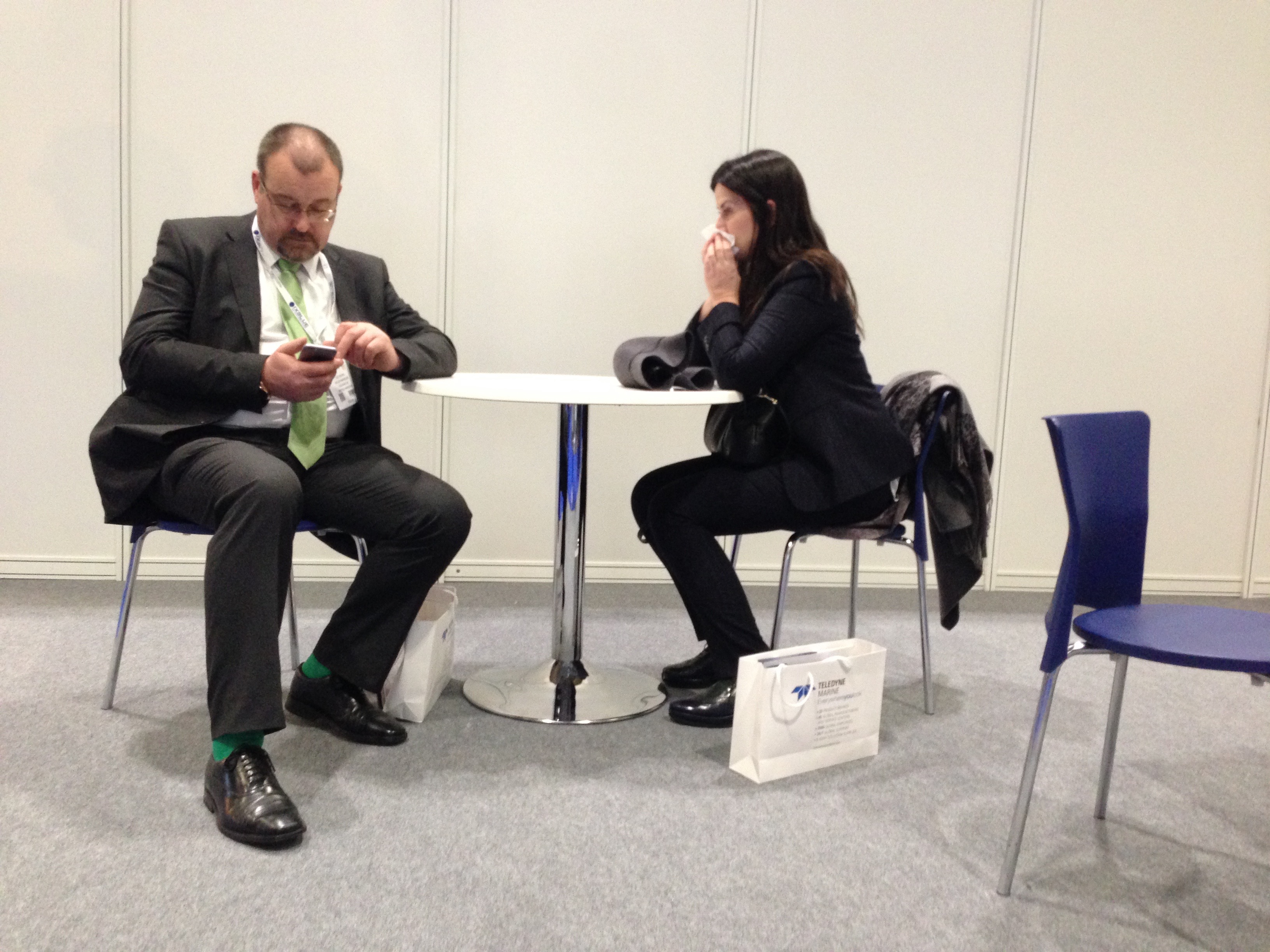 Besides, all conferences are essentially the same. There’s a vibe in the air. Everyone’s pumped. Plans are being made. Powerful people are spouting unimaginable amounts of bullshit at one another.

Every Conversation at every Trade Fair:

A Maritime Trade Fair is like a cocaine-fuelled Dalston house party with name badges. The only real difference is, at the trade fair, you actually have a far greater chance of landing that record deal you keep telling people about.

To begin with the whole thing seemed like a beautiful underwater dream. The smiling faces, the coloured banners, the sensibly dressed women; everything combined into one glorious assault on my senses. Wave upon wave of turquoise stands, each more mildly interesting than the last.

The longer I stayed in the hall the stronger my love for the conference became, until I began to imagine it was me up there on those stands. Me, exchanging meaningful handshakes! Me, nodding at fellow exhibitors! Me, handing out tiny parcels of smoked salmon to Japanese sailors!

I’m not too proud to admit, I was way out of control. I found a lanyard on the floor by the underwater support systems and before I knew it I was striding around town as qualified sonar consultant, Bo Johanssen. Bo was the BOSS. Bo knew all the tricks.

I actually winked at a guy as I walked past him. Just straight winked at a total stranger…and he winked back! Unbelievable scenes! That wink put me over the top. From that point on there was no turning back. I was Neptune, king of the sea, riding high on a wave of lies that was never going to break. 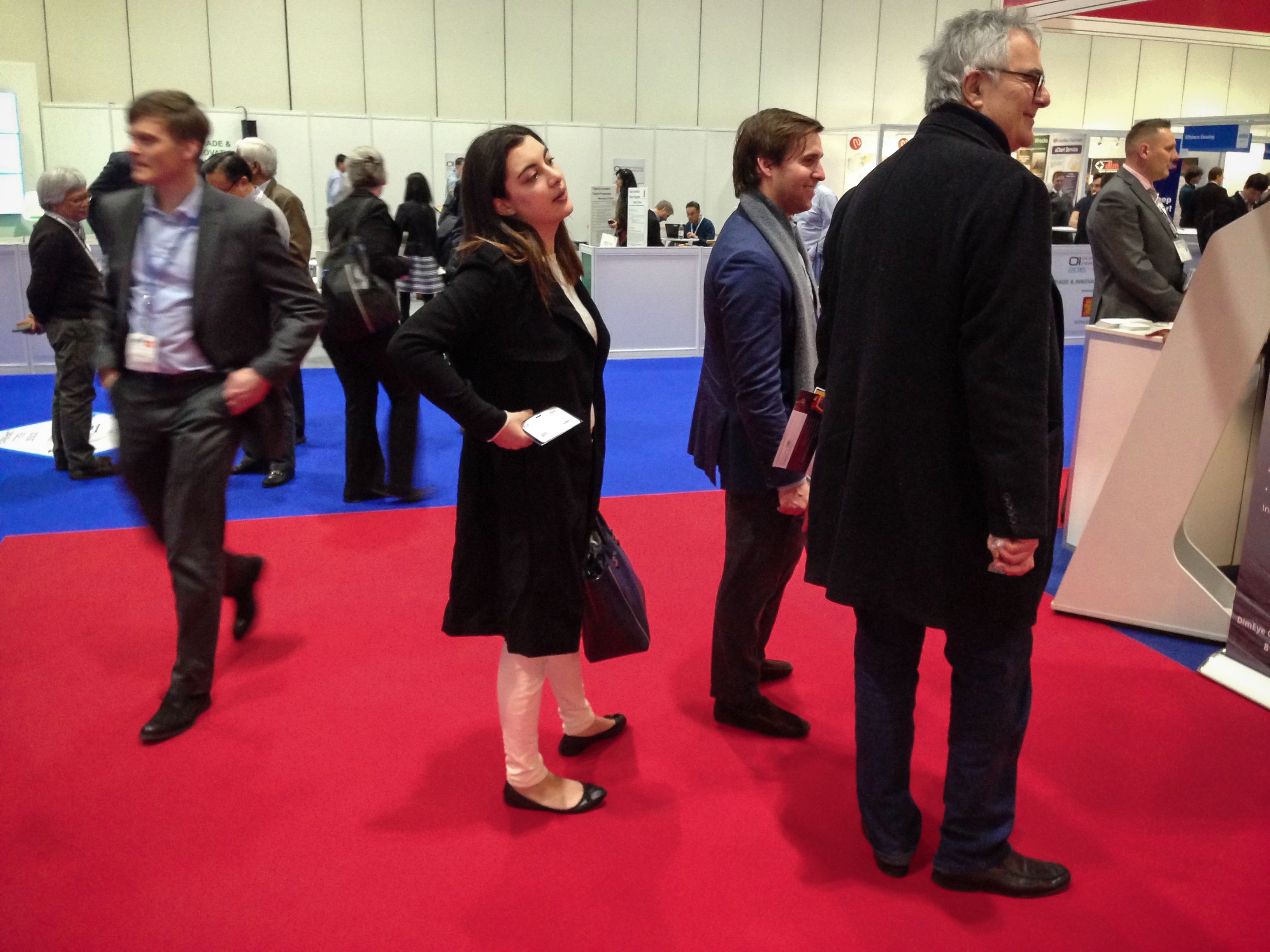 At my lowest point I was backstage at the Danish exhibitor lounge, flicking through a leaflet on semi-submersible drilling platforms, you know, just effortlessly fitting in. I’d already given out at least six friendly nods and one medium eyebrow raise, I was cruising; then I met Hideo.

He came out of nowhere. The first time I saw him he was only three feet away and he came in for a full handshake. No way out! Handshake is next level networking. After handshake comes business card, then business chat, then mouth kissing.

He told me his company had just invented a way of remotely mapping areas of the south china sea to a level never previously possible (classic ‘my shit is great’ opening).

Now you can ask anyone I know and they will tell you; I am many things, but one thing I am NOT is afraid to lie to someone’s face. But with Hideo It was different. I couldn’t get the lie out. I told myself that it was because I was hopped-up on a cocktail of pickled herring and bland Nordic cheese but maybe, deep down, it was because this man believed in me. He believed I was Bo Johanssen, sonar consultant, and maybe I liked that because maybe that meant that in a different world, in a different time, in a better place I could have been. At that very moment Hideo Suki, simple seabed mapper, validated me and maybe that meant I couldn’t lie to his beautiful face (NB. It could also have been because I was paralysed with shame/fear). Whatever the reason I couldn’t think of any lies so looked him dead in the eye and said:

As always with telling the truth: HUGE MISTAKE.

His whole face just fell apart. The smile disappeared and his face did an amazing dance of emotion…surprise, disbelief,…a hint of rage,…a kind of deep existential despair. For me? For him? For both of us.

Here he is, a guy supposed to be networking his way though the conference, and the man he chooses to talk to is a guy who will leave the house for free cheese. Literally a mouse of a man. It was utterly humiliating for both of us. I tried to keep the conversation afloat:

“But obviously I love oceanography, always have, probably always will…”

“Probably”, as though I might go off it?!? What was I trying to say – “I mean, I love the sea now but there’s always a chance I will get eaten by a shark and decide I’m not so keen”?

He just turned and left. Perhaps he was angry….perhaps he was sparing me the shame of blowing my cover…..perhaps it was because I had tried to skip directly to kissing on the mouth.

We’ll never truly know why he left, but he did, and as he quietly walked out of my life, I realised that Hideo Suki had set me free. He burst my bubble. He showed me what I had forgotten, what the dizzying haze of the Oceanographic conference had momentarily obscured, what I had always known to be true:

HAVING A REAL JOB IS HARD AS SHIT

Anyone tolerating it is a full blown hero. You full-timers have to approach strangers and make endless inane conversation. You’re forced to stay in soulless travel lodges on the outskirts of town. You spend days at a time desperately standing next to one another in tiny boxes, surrounded by identical crap, all claiming yours is the best, all feeling inferior. I couldn’t even pretend to know how to get that done. I realise there is free cheese but for that amount of work, you have to ask yourself, is that cheese really free? 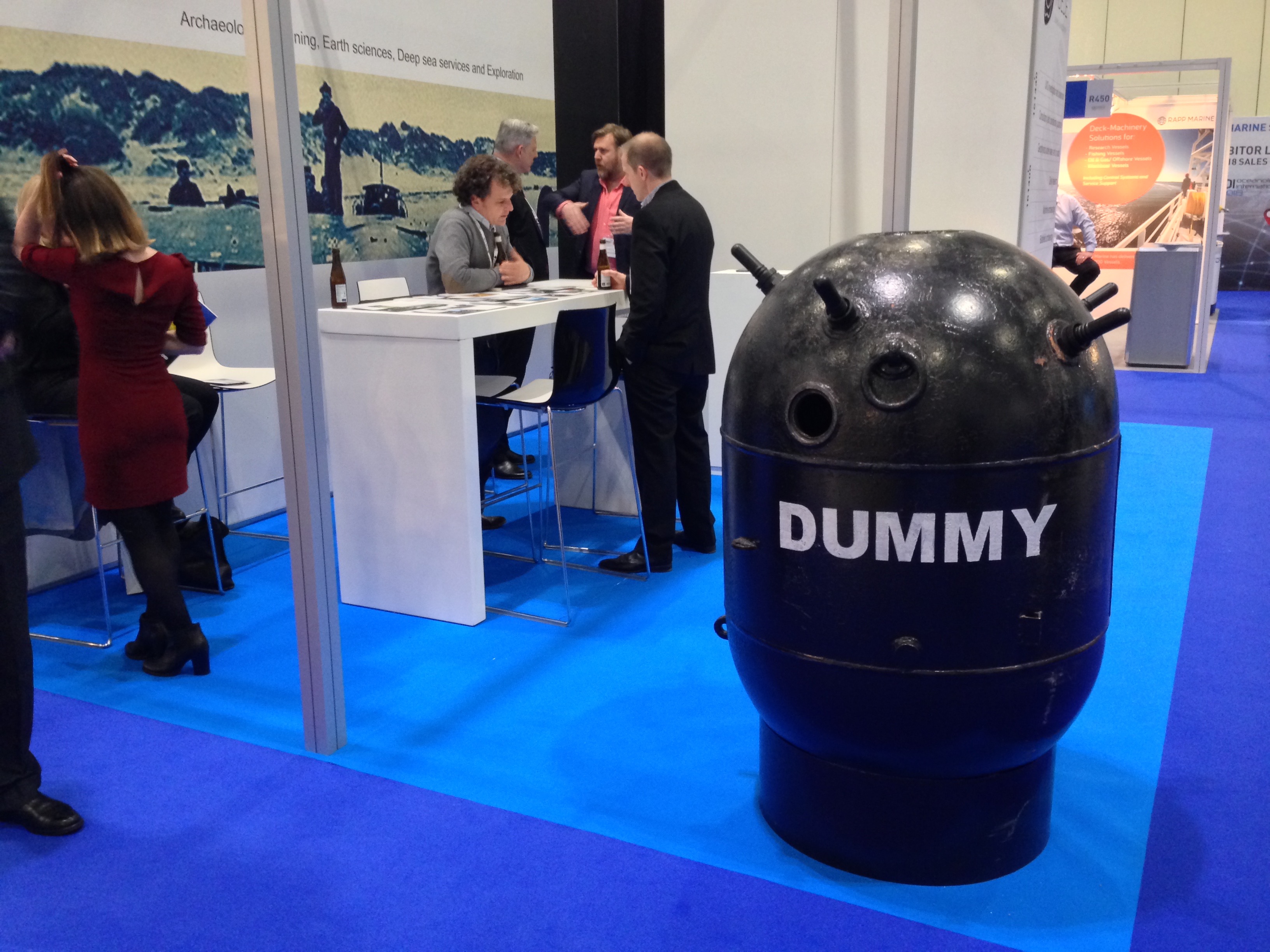 THE MORAL: “Sometimes, if you want to succeed in life, you’ve just got to be the best person you can be, and sometimes that person is completely made up.”
– Bo Johanssen, Sonar Guy

He see me do mi